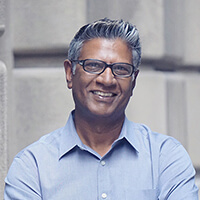 You’d be hard pressed to find a company that isn’t trying to ‘optimize team effectiveness’ these days. Everyone knows that great teams are what make great companies—but there’s less clarity around what exactly makes a team great.

If you ask me, it all comes down to humility. I’ve now launched three businesses and as a serial entrepreneur I’ve seen time and again that when humility is a core value, good things start to happen. This has held especially true in my new business, Fluence. Even though the founding team includes three ex-CEOs, we like to say that there are no E.G.O.s.

Based on my experience, here are four ways that you can live this core value and use it to build high-performing teams at work as well as in everyday life.

I worked with a co-founder of my last business for 12 years. First we were co-workers and then we were co-founders. While I'm 20 years more senior than both of my co-founders, the age gap never presented a problem—instead, we’ve always recognized each other’s talents and valued each other' opinions. We’ve absolutely had a few disagreements but we’ve had a long and successful relationship because of the mutual respect we share.

Google calls this ‘psychological safety’ and they’ve identified it as the number one predictor of team effectiveness. To put it in their terms: “In a team with high psychological safety, teammates feel safe to take risks around their team members. They feel confident that no one on the team will embarrass or punish anyone else for admitting a mistake, asking a question, or offering a new idea.”

Most of the time in business, laser-like focus pays off. But when it comes to forging human connections, it’s important to stay open. I’ve had CFO referrals from investors. I’ve had developer referrals from my nanny. You just never know.

Years ago, I was a sales manager at a software company and my wife’s friend goes: “Hey, my husband's going to be back from Whistler after two years of skiing, do you think you'd have a job for him?” He was a smart guy, with a degree and some experience, but his hair was down to his waist. So I said: “Dude, if you get a haircut and a tie, we can talk.” Long story short, he quickly ended up being the best sales guy I had. He then became a sales leader and now sits on the executive team at a major company.

#3) Accept change as a constant

You can't always count on the people who got you to ‘Point A’ to get you to ‘Point B’—this holds true for individuals and for teams. People change, life changes, objectives change. In my last business, we returned more than 10x to the early investors. But despite having a great experience, they weren’t all looking to make new investments when I was out fundraising for Fluence.

You have to expect that journeys won’t always map and timing won’t always line up. What that means is, you have to be constantly renewing your network, making new connections, and looking for new ways to progress.

#4) Appreciate the importance of timing

The right timing makes things happen. In many ways, it was the catalyst that let us launch Fluence. I was on the cusp of semi-retirement when I was approached by a few acquaintances with some enticing intellectual property. Like me, they had a successful run with building IP and growing a software company. So they said, “Let’s do it again.”

We joined forces with our CEO, John, shortly thereafter, but I had actually first met him many years ago under very different circumstances. Which brings me to the other side of the coin—bad timing can stop opportunity in its tracks.

When this happens, it’s important to separate the circumstance, from the individual. When I first met John, he was CEO of an established company, whereas the company I co-founded was still quite young. Nonetheless, I thought there was a chance that we could partner. The deal didn’t move forward, but it also didn't end the relationship. We stayed in touch and now we work together every day.

It all comes back to humility

Despite its inherent importance, there’s no formal teaching on how to implement humility as a business strategy. In fact, when I did my MBA, some of my experiences even ran counter to the behaviors and processes that I would have hoped they’d want to model. When I asked my professor of strategy if he would meet me for a coffee to talk through a business idea, his response was: “If I had a nickel for every new idea that a student brought to me, I'd be rich.”

And then he didn’t even meet me for coffee.

Values are also almost impossible to track as corporate KPIs. Yet somehow, humility ends up having a real impact on company success. Yes, 2/3 of modern consumers select products based on brand values, but I’d argue that the real ‘secret sauce’ lies in how humility transforms team performance day-in and day-out. As bestselling author, Simon Sinek, has put it: